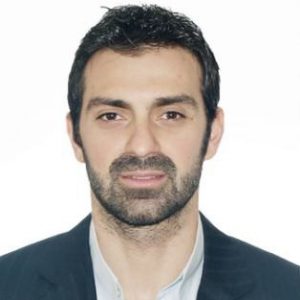 Responsible for the MANAGEMENT department is Alexandros Katsaros.

Alexandros Katsaros graduated from the Department of Digital Systems of the University of Piraeus in 2008 and continued his studies by obtaining a master in Techno-Economic Management and Security Systems at the same University.

He has been actively involved in basketball for 18 years and was a professional and semi-professional player in all leagues in Greece until 2011. Among other his achievements, Alexandros won the Greek Basketball High-School championship and the European Armed Forces Championship.
As an active player, Alex also started working on his corporate career and served in the consulting industry where he was responsible for structuring contracts.

During the last few years he has developed great relationship with all clubs not only as an ex-player but also as an agent. He succeeded to negotiate and sign several American and Bosman players in the regions of Greece, Italy, Spain, Germany, Russia, Cyprus, Turkey, China Scandinavia and Middle East.

His recent achievements are the guidance of MIKE JAMES from A1 Greek Championship straight to Laboral Kutxa then back to Greece and Panathinaikos, which participates in Euroleague and then to NBA Brooklyn Nets , the transfer of Patrick Ewing Jr in Qatar and Bryce Cotton, Marcus Denmon, Bernard James and Ex-NBAer Chris Copeland in Turkey. Among others, he manages the careers of Anthony Hickey, Jermaine Love, Scott Suggs, Darrius Johnson Odom ,Matt Janning , Rion Brown , Jacorey Williams and Devin Davis and many other talented players.

Alex was born in 1983 and speaks Greek and English.